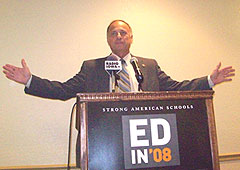 Earlier today, two candidates for congress spent a few moments speaking to Iowans at the Republican National Convention, telling personal stories to connect with their audience.

Neither Kim Schmett of Des Moines nor David Hartsuch of Bettendorf has raised much money for their campaign and neither is listed as a favorite to unseat the Democratic congressman they’re running against. Schmett, the Republican candidate in the third district, spent some time talking about a Scotch/Irish ancestor who settled on this continent before the American Revolution.

"My ancestor, who was a minister, pulled his small congregation together out in the foothills of South Carolina, had a sermon one Sunday and he said, ‘You know, we moved here for freedom…There’s a time to pray and there’s a time to fight.’ Most of the guys left the service that day and they went off and they ended up forming a guerrilla unit and we ended up winning the resolution," Schmett said "My guy spent the next year and a half in a British prinson. I’m not asking you to do that but the point is, folks, we’re at a point right now in our life where it really matters."

Schmett argued this is an election like no other. "Everything that you and I have believed in, our culutral values, the basics that our American way of life is built around is being questioned this year," Schmett said.

Hartsuch, the Republican candidate in the third district, admits he "threw a curve ball" to the Iowa Republicans this morning by revealing he models himself after the late Paul Wellstone, the Democratic U,.S. Senator from Minnesota who was killed in a plane crash. "I am a right-winger, there’s no doubt about it," Hartsuch told reporters afterwards. "Paul Wellstone, I do believe, did reflect a very high level of service and I think people respect that. Regardless of whether you’re from the left or the right or the center, people want to know that the people you’re electing to office are going to be representing everybody, not just special interests."

Hartsuch, an E.R. doctor in the Quad Cities, lived in Minneapolis for 15 years and had a personal encounter with Wellstone that involving a mentally ill patient who threatened Wellstone’s life. "While I disagree with (Wellstone) on his policy — he definitely was somebody who fostered collectivism whereas I believe I foster more individualism, nonetheless I could never doubt his integrity or his devotion to our society," Hartsuch told reporters.

Some of the Republicans in this morning’s audience, though, gasped and one man loudly said, ‘Geez,’ when Hartsuch praised Wellstone. "I see the look already. I can guarantee you that from a policy standpoint, I am no Paul Wellstone," Hartsuch told the crowd.

A Republican in the audience replied: "Good."

Hartsuch continued: "However, there was some attribute of Paul Wellstone that I believe every elected official should emulate and that is the desire and the care for the individual person. He had a heart for people that you would not believe."

Hartsuch said in his first two years as a state senator, he’s tried to act in that spirit. "There was a young was a young gentleman who was mentally retarded….and I don’t mean to do this to mock him, but" Hartsuch said, before mimicing the man’s voice: "I can’t speak for myself. I need you to advocate for me."

Hartsuch continued in his own voice: "And that really touched me that day because I realized there is no lobbying group for him. There’s no special interest money for him and if anyone was going to care for him, it had to be me."

Congressman Steve King, a Republican from Kiron, was the third on the list of morning speakers, spending most of his time focused on the McCain/Palin match-up against Obama/Biden. "I propose this: Let’s put our ticket up against the other side…Put those two up there and give them a 30-06 and we’ll put John McCain, our top gun up against crackshot Sarah Palin or those two together against Obama and Biden and we’ll settle this thing," King said. "Who’s the best shot?"

King called Palin a "real" conservative who "nailed" her speech last night. "We’ve needed a strong, conservative leader," King said of Palin. "I’ve said for a long time I’d vote for Margaret Thatcher if she were American." Margaret Thatcher, nicknamed the "Iron Lady," was Britian’s prime minister from 1979 to 1990. But King’s comparisons didn’t stop there.

"Hockey mom extraordinairre," King said of Palin, before launching into a baseball metaphor. "She took that pitch that came right down the middle of the plate. She cracked it out of the park. She drilled a 10. She’s our Shawn Johnson." Johnson is the 16-year-old gymnast from West Des Moines who won gold and silver medals in the Olympics and went to Denver last Thursday to lead the Pledge of Allegiance at the Democratic National Convention.

Click on the audio links below to hear all of what King, Hartsuch and Schmett had to say this morning.