You are here: Home / Human Interest / Massive effort to create meals for millions 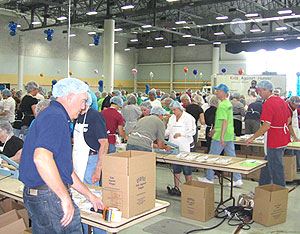 "At the last count, over 11,000 people have signed up to package meals," Walke says, "and that number is growing." Businesses are giving their employees paid time off to volunteer, church groups are chipping in and schools are organizing field trips to Des Moines to help.

There are 115 assembly lines set up for volunteers to package food through Sunday night. "In the course of five days, we’re hoping to package 3 million meals to send out to countries where people are starving," Walke said. The pouches of dried goods will eventually make it to places like El Salvador, Haiti and Guyana. 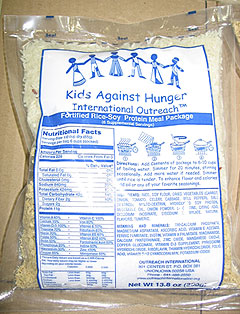 They start out as rice and soy and there’s dehydrated vegetables and a tablet with vitamins and minerals and a chicken flavoring.

"It’s reconstituted with boiling water, and it ends up being a mild chicken-flavored casserole," Walke says.

The volunteers are also bringing canned foods or school supplies to help needy families in Iowa. Iowans can sign up to help online at the Meals form the Heartland website.