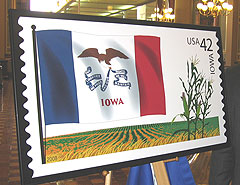 A new stamp, featuring the flag of Iowa, was unveiled by representatives of the United States Postal Service today.

The stamp, which also includes several corn stalks in the foreground, is part of a series the USPS is doing called “Flags of our Nation.”

The crowd, gathered in the statehouse rotunda, included sixth graders from Jordan Creek Elementary in West Des Moines. Governor Chet Culver explained the significance of the three colors of the Iowa flag.

“The white in the middle of the flag represents the blank page on which the history of our state would be written. The blue stands for loyalty, justice and truth. The red stands for courage…in tribute to our soldiers who first carried this flag in battle,” Culver said.

In the center of the flag is a bald eagle carrying a streamer inscribed with the state motto: “Our liberties we prize and our rights we shall maintain.” The Iowa State Flag was designed by Dixie Gebhardt in 1916. It was officially adopted by the legislature in 1921. 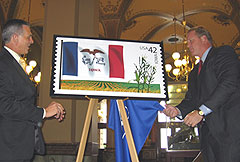 Culver said, “The symbols of our flag – loyalty, courage and a belief in our unlimited future – these are values we should continue to live by.”

Doug Morrow of the U.S. Postal Service helped reveal a large copy of the stamp, framed in glass.

The Iowa stamp is available for purchase only with a coil of five other stamps featuring the flags of other states or territories being honored during the second release in the series. Other stamps in the “Flags of our Nation” series will be released in sets of 10 through 2010.