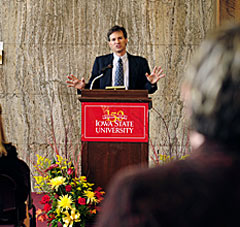 I.S.U. President Gregory Geoffrey says the National Science Foundation award will be used to research new ways of making products with grains and grasses, rather than petroleum.

"We need to move toward a cleaner, renewable source of the energy, chemicals and products that we need," Geoffrey said. "In Iowa, we know we can get many of these resources from plants." The work would build on research already underway on turning plants into fuel – and expand it – so more chemicals can be produced from plants, and thus a wide range of products.

I.S.U. professor Brent Shanks says the petroleum industry has been doing the work for a long time, so the newer approach will take time to catch up. "If we look at the petrochemical process, it’s a remarkably efficient system because it’s been developed over 70 years. So, these new products are having to compete with products that have been optimized over 70 years," Shanks said.

Researchers point out that 8% of every barrel of oil used in America ends up in the chemical market, not the fuel market, and it’s time those chemicals came from a renewable source. The grant will establish an Engineering Research Center for Biorenewable Chemicals. The center will be housed in a new building on the west side of the I.S.U. campus in Ames.

Shanks says I.S.U. researchers will work closely with other universities and private industry to develop new plant-based chemicals and turn them into new products.