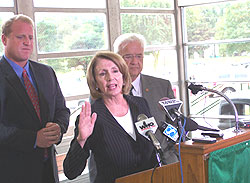 U.S. House speaker, Nancy Pelosi told state and local officials in Des Moines today that the 2.65 billion dollars in disaster money that’s been held up since its appropriation in June will get here.

"That money will come, it’ll come in a matter of I think within a week of so. And so count on it……so make the commitments, do the outlays and what we’re going to work to see is that that money will compensate for money, you know you might have some cash that you can spend and we’ll make good on it with that money," Pelosi says.

Pelosi met with the mayor of Des Moines, Governor Chet Culver and members of the Iowa Congressional delegation at North High School, near the area where a levee gave way and flooded the neighborhood in June. Rain ironically forced Pelosi to cancel her tour of the flooded neighborhood.

Pelosi drew criticism for not passing an additional disaster appropriation for Iowa before congress took its summer recess. She said today that extra money is a high priority. Pelosi says they’ll have a bill ready next week based on the Rebuild Iowa Commission’s documentation of need and she says they’ll used "whatever vehicle’s leaving the station" to get the additional money to Iowa as soon as possible. Pelosi pledged to work to cut through the red tape of the government bureaucracy when it comes to disaster funding. 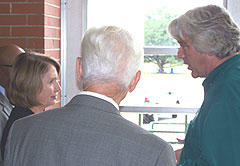 "Hopefully with this situation here, and the experience of Katrina …that this will change," Pelosi says, "but the red tape is a stunning thing, just when you think you’ve taken it away here, it reappears there." F-E-M-A today told Iowa it has up the federal match from 75% to 90% when it comes to disaster funds.

Pelosi questions why states should be required to pay 25% of the cost in natural disasters anyway. Pelosi says it’s not appropriate when compared to what has happened in other disasters, and she questions whether the states should have to pay any match at all for the federal funds.

"And I think we should revisit that issue to, what’s the point? Is the point if you put up money locally than you’re serious about making improvement, What’s the point? Is it worth it," Pelosi asked. Pelosi says we’ve had more hurricanes after the Iowa disasters, so the issue of disaster funding is not going away.

She says we don’t know what the rest of the hurricane season will bring, and there are wildfires in California, so we’re all in the same boat when it comes to disasters, we all want help. "So I think there’s a national constituency for real change in terms of how we deal with natural disasters," Pelosi says. Pelosi left Des Moines and is also visiting Parkersburg,  New Hartford, Waterloo and Cedar Rapids today.