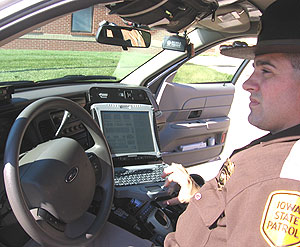 An Iowa State Patrol Trooper is testing some technology that’s reminiscent of a 1980s TV show.

Since February, Trooper Marc Griggs has been driving a voice activated patrol car. He simply tells the onboard computer what to do – rather than punching buttons or flipping switches.

"Whatever I say, it does," Griggs says,"I don’t have to worry about fumbling around, hitting the radio or light bars. I keep my eyes on the road and my hands on the wheel."

Make no mistake, Griggs is no David Hasselhoff and he’s not driving Kit, the car from the TV show Knight Rider. The voice activated system only repeats what Griggs asks for – and then activates lights, sirens or other technologies.

The system doesn’t carry on conversations and, in fact, doesn’t always recognize Griggs’ requests. When the system malfunctions, Griggs can still use the traditional controls. "I can do it manually, voice activated or by touch screen on the computer," Griggs said. "If one system fails, I have two backups to go to."

Griggs, who’s based in Des Moines, is the only law enforcement officer in the state using the technology. That probably won’t change anytime soon, according to Iowa State Patrol Captain Curt Henderson.

"This is the type of technology that I see eventually working it’s way into our organization, but at this point and time, it’s probably cost prohibited," Henderson said. The system costs around $3,000 per car.

Griggs is testing the unit on behalf of the company 54ward, based in Orangeburg, New York. A company spokesperson says the technology is currently used in nearly every law enforcement vehicle in the state of New Hampshire.