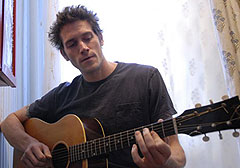 The son of music legends Carly Simon and James Taylor is taking a stage in Iowa for the first time Thursday night. Like thousands of others, Benjamin Taylor taught himself to play guitar by listening to his dad’s songs.

The 31-year-old is on a national tour to promote his third album, "The Legend of Kung Folk." Taylor says he doesn’t always seek out his parents when he’s songwriting. "It just depends on the timing, really," he says. "If I get the chance to, while the song is being written, I’ll bounce it off both of them. They’re both such incredible editors."

While Taylor says having famous musicians for parents has opened some doors, but he also feels it’s made him work harder at his craft. "If you’re in the position that I’m in, then based on who you are, you do get some more opportunities but the sad thing about it is that you’re usually not in a place to be able to capitalize on those opportunities." Taylor says. "If you come from where I come from, usually by the time you get those opportunities, you don’t have the experience to back them up."

Refusing to be pigeonholed as playing a certain type of music, he calls his style "Kung Folk," and says his target audience is, simply, good listeners. "Kung Folk is just — it’s folk with a kick," Taylor says. "It’s metamorphic folk. It’s a philosopher’s funk. It’s just folk that’s been worked with enough until it’s something I’m comfortable with. Folk is something that I’ve always resisted the label of for a long time. This is folk that we worked with until we felt good about it."

Taylor’s playing at The People’s Court in Des Moines at 8 P.M. on Thursday. For more, visit his Taylor’s website .