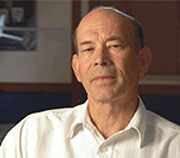 A developer of battery-powered vehicles says electric cars will work in Iowa and other Midwestern states with a cold climate. Wally Rippel is an engineer at Tesla Motors, a company that makes high-performance electric vehicles.

He says battery-powered cars have an advantage in cold climates that hybrid vehicles, like the Toyota Prius , do not. "We have the technology to keep batteries warm in cold climates and that is using electrical energy and in that sense the pure electric may trump the conventional, non-plug-in hybrid in those areas," Rippel says.

Rippel contends vehicle batteries powered by electricity are a better alternative than hydrogen-fuel cells. "Hydrogen is not an energy source. It is not a fuel like natural gas. You don’t dig a hole in the ground and have hydrogen coming up. You get hydrogen the same way you get electricity by starting out with some sort of primary energy source: coal, oil, natural gas, nuclear, solar, wind," he says.

"The problem with hydrogen is energy efficiency. You end up losing three-quarters of the energy or more when you go from to source of the energy to where you’re going to use it." Rippel will be in Iowa this weekend to speak at the I-Renew Energy and Sustainability Expo at the UNI-Dome in Cedar Falls.

He made his comments during an appearance on "The Exchange" on Iowa Public Radio. Rippel was featured in the 2006 documentary: " Who Killed the Electric Car?" Rippel was among those in the film who contend the oil industry is to blame.

"There’s still roughly a trillion barrels worth of oil left in the Earth’s crust," Rippel said in the documentary. "That’s $100 trillion worth of business yet to be done." Rippel has been developing and promoting electric cars for decades.

In 1968, while Rippel was a student at Caltech, he converted a Volkswagen microbus into an electric vehicle that won the Great Transcontinental Car Race against M-I-T. He now works at Tesla Motors , which is known for its Roadster — an electric car which can go from zero to 60 miles per hour in under four seconds.