You are here: Home / Business / Three employers given awards for supporting the Iowa National Guard 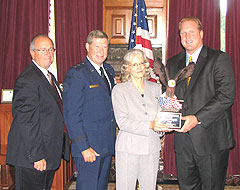 Three Iowa employers were recognized in Des Moines Tuesday for their support of National Guard or Reserve members called to active duty.

The first ever "Iowa Freedom Awards" were presented at a Statehouse ceremony to Musco Lighting of Oskaloosa, Radio Communications of Waverly and Howard County Government.

Iowa National Guard Adjutant General Ron Dardis says employer support is especially significant as service members face longer and more frequent deployments. "Our young men and women that come back after serving…it’s very difficult for them to reintegrate back with their families and family life," Dardis said. "So to know that they have a job waiting for them is really, really important."

A total of 90 Iowa employers were nominated for the awards. Dardis described the support of all the employers in the state as "fantastic." Dardis says, before long, Iowa will have 12,000 men and women deployed to the War on Terror and peacekeeping missions around the world.

"We couldn’t do the mission we do, without your strong support around the state," Dardis told the business leaders gathered at the ceremony. The new Iowa Freedom Awards are modeled after a national award of the same name.