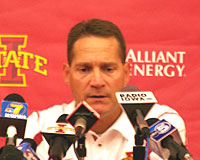 Iowa State coach Gene Chizik says anything can happen today in college football and he says UNLV is no fluke. Chizik says while it was considered an upset he was not shocked by it, as he says they are 2-1 for a reason and that loss came to a good Utah team.

The Cyclones are 2-1 after a 17-5 loss at Iowa and Chizik says this week will test the character of his team. Chizik says this if the first test of playing a game after a loss, so he’s interested to see how they respond. He says while they are upset at losing, they can’t let the game beat them twice.

Chizik says the Cyclones need to put the Iowa game behind them as they face a very different style of a football team. He says he’ll be thoroughly disappointed if they don’t move on and put the game behind them.

Sideline communication was a problem during the game at Iowa and the Cyclones had to burn several timeouts. Chizik says, “We made some poor decisions as a coaching staff, we weren’t very good when we needed to be good, to be up front and frank, that’s just the bottom line, and we need to get some things ironed out.” He says it was not the players fault it was his fault and they have to do a better job.

Austen Arnaud played a lot more than Phillip Bates this past weekend but Chizik says that was not by design and he plans to continue the rotation. Chizik says you go in and play it as the game unfolds, but he says that could flip as one could play more plays as they go along. He says it could flip again this week.