You are here: Home / Human Interest / American Gothic House lets you get in the picture 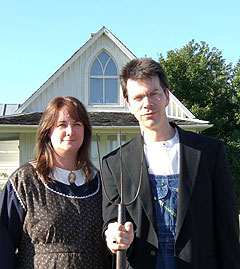 Perhaps the most famous house in Iowa is still attracting thousands of tourists a year and it now has a modern visitors’ center next door.

Jessie Strom runs the American Gothic House Center in the southeast Iowa town of Eldon, beside the little frame house Iowa native Grant Wood used as his backdrop for his globally-famous painting nearly 80 years ago.

"We’ve got our exhibit portion which showcases parodies of ‘American Gothic’ that have come about over the last dozen or so years," Strom says. "We also have educational displays that go into more depth of — Who is Grant Wood? How did he end up here in Eldon of all places? What are some of the details of the painting that you sometimes don’t notice?"

The center, which opened in June of 2007, also has a media room and a gift shop, but the most popular -free- feature is the costume closet. Visitors can dress up as one of the ‘American Gothic’ models, go outside in front of the actual house and recreate the famous painting.

There are different sizes of the dress and apron for the women to wear, each with the distinctive brooch, though she says sometimes men outfit themselves in the dresses — just for laughs. Strom says there’s also the dickey, overalls and black jackets for the men, in addition to antique wire-framed glasses and several hay forks.

Visitors can send their pictures back to the center and they’re displayed prominently. Strom says some of the photos are hysterical as people bring their own props and inject their own humor into the poses. She says the painting is the world’s second-most-paradied work of art, behind only the Mona Lisa. So why is the portrait of the dour-faced farm couple so hypnotizing — and how did it become such a part of our culture?

Strom says: "I get different answers from different people when they come through as to why they are drawn to this painting and why they like it. Some people say they know somebody that guy reminds them of, maybe it’s their grandpa or their neighbor or uncle. They’re just drawn to those faces and I think it’s solicited humor ever since it was first done back in 1930 and it just hasn’t stopped." The models used for the painting weren’t husband-and-wife. They were painter Wood’s sister and his dentist.

To learn more about the Eldon house and facility, visit the Wapello County American Gothic website .