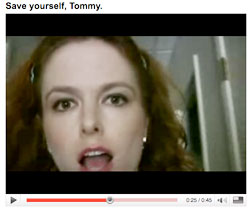 The Iowa Department of Public Health has something it wants to "go viral" with teenagers. A YouTube video posted on-line this past weekend hinted at what was to come.

Bonnie Mapes of the Iowa Department of Public Health says the "spooky" video — which looks a bit like the movie "Cloverfield" — was designed to appeal to teenagers. "It’s a girl in a town and she’s talking to her brother, wishing him a happy birthday, and all of a sudden everybody disappears," Mapes says. "It was just a very short teaser designed to get youth interested."

Some Springville residents were a bit frightened and confused by the run-up to the campaign as posters were plastered around town with the phrase "We’ll miss you Springville" printed on them. You might see images of Springville in TV spots airing statewide this week, although the ads are running on stations which primarily appeal to teenagers and younger adults.  "There are adults who may never see them because they aren’t running on the evening news. They are running on stations that youth watch more often and, again, the YouTube video was designed specifically to reach youth," Mapes says. "I don’t even know how to use YouTube, but they certainly do."

According to Mapes, Springville is just the first Iowa town to get this treatment. "We have two more that will be revealed within the next couple of weeks," Mapes says. There’s a countdown clock posted on-line, too, at WhatTownIsNext.com  to perhaps produce even more interest in the project.