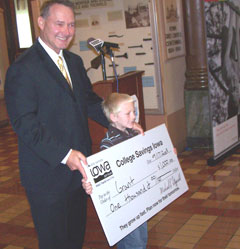 The state program designed to help Iowans save money for their kids college has hit a milestone.

Students from a Des Moines elementary school celebrated the 10th anniversary of the College Savings Iowa program in a ceremony at the state capitol.

Iowa Secretary of State Michael Fitzgerald says the plan was created through a bipartisan legislative effort, and has come a long way since it’s inception.

The first year they had around 2,000 people enrolled with barely one-million dollars, while today there are 160,000 accounts with around two-billion dollars.

The scope of the program has also changed. Fitzgerald says at the beginning the plan also required that you have an account for someone 17 or under, but now it’s lifelong learning, so if you want to go back to school for a second career or graduate school, you can save for college expenses. Enrolling in the program has also become easier with advances in technology.

Fitzgerald says you can get on the computer at College-Savings-Iowa.com and create an account in a couple of minutes. He says the program includes state and federal tax benefits. Fitzgerald says the key thing they stress is to start getting in the habit of saving.

He says you don’t have to save enough to pay for the entire four years of college, you can save enough for the first semester, but the important thing is to start saving. Fitzgerald says you have to start with 25 dollars and then can put in a much as you want, but you need to get into the habit of saving and that money will grow. For more information, call 1-888-672-9116, or visit the College Savings Iowa website .