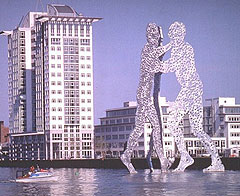 "The Molecule Men" are coming to Council Bluffs, but it’s not an invasion. Todd Graham, spokesman for the Iowa West Foundation, says work is underway on a large, eye-catching sculpture near the Mid-America Center, not far from the Missouri River.

"When it’s erected, it will be three human figures about 50 feet tall," Graham says. "It will be visible from Interstate 80 and Interstate 29." He says the one-point-eight million dollar sculpture will be well-lighted when the sun goes down.

"Since it’s out of aluminum, it should sparkle at night when it’s illuminated," Graham says. "It should be a very impressive sight as you enter the state of Iowa." There are only two other "Molecule Men" sculptures in the world. One is in Berlin, Germany, and the other in Los Angeles. The Iowa version should be finished by next week.