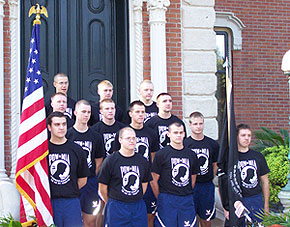 A group of Iowa State University Air Force R.O.T.C. cadets are running from Des Moines to Ames today to bring attention to prisoners of war and soldiers missing in action.

The cadets met with Governor Chet Culver on the steps the governor’s mansion this morning for the signing of a proclamation declaring it P.O.W./M.I.A. recognition day in Iowa.

Colonel James Cramp is the commander of the R.O.T.C. detachment. Cramp says they’ll be running north on Highway 69 to the campus, approximately 35 miles. Cramp says they’ll have two groups of cadets running the route. The cadets are wearing black t-shirts with the M.I.A. symbol on the front.

Cramp says, "Beyond the normal curriculum of military history, we also emphasize the importance of the Code of Conduct, which is vital for the sustainment of our P.O.W.’s and also an Air Force recent advent, the Airmen’s creed, which is an Air Force version of the code of conduct of sorts."

Cramp says Republican Presidential candidate John McCain’s story of being a P.O.W. in Vietnam has helped bring more awareness to the cause. The director of the Iowa Department of Veterans Affairs says there are still 26 Iowa soldiers missing in action from Vietnam, and 136 from the Korean war.