You are here: Home / Politics / Govt / "Tomorrow the bell rings" for voting in general election 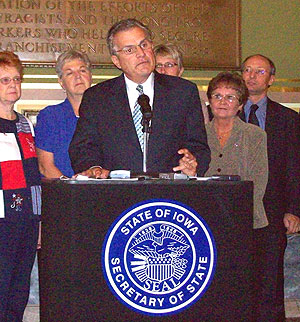 You may vote in your county auditor’s office, starting Thursday. Many counties have or plan to have satellite voting stations set up in libraries, schools and even grocery stores in the weeks leading up to Election Day.

Over 2.1 million Iowans have already registered to vote, a higher percentage than at this time four years ago during the last presidential election.

However, as of today, there have been about one-quarter the number of absentee ballot requests than in 2004. Mauro is still optimistic as many as 80 percent of eligible Iowa voters will cast a ballot by November 4th.

"Unless something’s happened between January and November when we broke every kind of record imaginable at the Caucuses and based on the fact that I think Iowa voters are probably the most informed voters in the nation and they have seen all the candidates from both parties…I can’t imagine it falling apart after we had such a tremendous Caucus season, but we’ll find out on November 5th," Mauro says.

About 72 percent of eligible Iowa voters cast ballots in 2004. For more information about voting, visit www. sos.state.ia.us.  A function on the website helps you find out if you are registered to vote and where your polling place will be on November 4th if you choose to vote on Election Day.

Cerro Gordo County Auditor Ken Kline, president of the Iowa State Association of County Auditors, says his group has developed another website that features extensive information about voting. "Elections are essentially about trust," Kline says. "In 2000 in Florida in the presidential election there began a steady erosion of that trust. It would be easy for county auditors to say, ‘That ain’t us. That can’t happen here. We don’t have those problems. We don’t have that system. We don’t have that equipment,’ but that doesn’t change where we’re at and that doesn’t change our responsibility."

The Iowa Auditors website   is designed to answer those questions. It will be up and operating tomorrow.