You are here: Home / Fires/Accidents/Disasters / New guard rails going in on Interstates 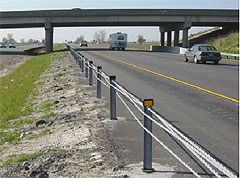 The Iowa Department of Transportation is in the process of installing new guard rail systems that are designed to prevent accidents like the one that happened this week in Cedar Rapids.

That crash on Interstate 380 in Cedar Rapids killed two people when their pickup crossed the median and slammed into an overpass.

Iowa State Patrol Sergeant David Willis says troopers see the results of those types of accidents all to often. "They’re some of the most tragic and devastating accidents we come across, there’s never a good outcome," Willis said. DOT workers are now placing median cable barrier systems in locations where median cross-over crashes happen the most. Cathy Cutler, with the DOT, says research shows they’re 95-percent effective in stopping cars from crossing the median.

"The idea behind them is to slow down and guide the vehicles that come across, so they don’t hit and bounce back into traffic. They’re more guided to a safe stop," Cutler said. Some of the cables are already up along some Iowa interstates and more will be installed in years to come. They are expensive. For instance, five miles of cable placed on Interstate 80 in Iowa County cost just less than a million dollars.

"I think it will be a good project in the long run," Willis said. "If it saves one life, it’s worth it." Over the next five year, the DOT plans to install the median cable barriers in locations near Des Moines, Ames, Waterloo, Cedar Rapids and Iowa City.