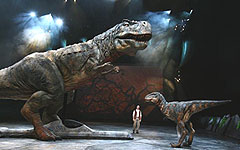 A 20-million dollar production that brings dinosaurs to life makes its Iowa debut today as "Walking With Dinosaurs" opens in Des Moines.

Matt McCoy, the show’s head of puppetry, says the robot-dinosaurs accurately portray the terrifying creatures that thrived on Earth, then vanished 65-million years ago.

McCoy says some of the 17 remote-control puppets are enormous and weigh in at one-and-a-half tons. "The brachiosaurus is 36-feet high — it’s one of the long-necked ones. The T-Rex is 56-feet long. All of the puppets in the show are a one-to-one scale. They’re based on real fossils that have been dug up and from that they’ve extrapolated just how big they should be," McCoy says. "When someone sees the T-Rex thundering on stage and roaring, that’s how big they really were."

The storyline features an on-stage human narrator and paleontologist who presents the 200-million year history of the dinosaurs’ time on our planet. McCoy says, "We actually go into some detail about their adaptations and why they looked a particular way. I think the fascination with dinosaurs is that, yeah, they were real animals but there’s absolutely nothing like them walking the earth now. Some of them had the most bizarre body maps you can imagine."

Still, he says the dinosaurs went through a logical progression because environmental forces were causing them to evolve. The puppets were created by a team of 50 engineers, artists and animatronics experts in Australia over a full year. It takes three people working in tandem to run each one of the larger dinosaurs — and virtually all of it is done by remote control from 70 feet away. McCoy says he’s working in his dream job as this is the culmination of many of his longtime passions.

"I’ve always had a thing for dinosaurs and I’ve always had a thing for robotics so it was kinda’ like a thing of going, oh well, I get to play with giant animatronic puppet robot dinosaurs," he says. "Sometimes I look at them and I think it’s like being a Marvel super-villain. If you want to get into the League of Evil, you have to have your own army of robot dinosaurs. Yeah? Here I am."