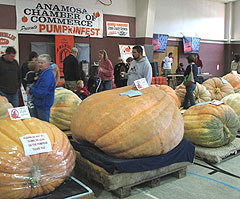 A Des Moines woman has captured the top prize in an annual pumpkin growing contest.

That’s more than 300 pounds lighter than last year’s winner. Young says this year’s weather was a factor in the lighter weights.

“We did have a cold spring…the weather just wasn’t as great as it was last year,” Young said. Julie’s husband, Don, won last year’s contest with a 1,662 pound pumpkin. He finished third this year.

Julie says the key to a plump pumpkin is a combination of genetics and fertilizer. “We make up a special tea of worm castings, molasses, seaweed and fish (fertilizer)…all organic,” Young said. What will Young do next year to improve on the Pumpkin’s size?

“Just pray to the pumpkin God to give us a good one,” Young joked. One pumpkin actually topped Julie Young’s entry. That pumpkin weighed 1,370 pounds, but was not eligible to win because it was damaged by a ground hog.