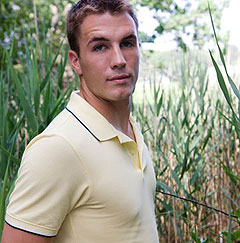 A few weeks ago, Playboy launched its "Girls of the Big Ten" issue, featuring several University of Iowa coeds.

Cosmopolitan is launching a contest of America’s most eligible bachelors, featuring a beefcake boy from each state.

Iowa’s entry is Keaton Frye, a 20-year-old from the town of Eldridge, just north of Davenport.

Frye was nominated by one of his sisters, who said he has excellent manners and an extremely romantic heart.

He says having seven older sisters taught him "how to listen to women and be sensitive to their needs." He calls himself spontaneous and athletic and says his dating deal-breaker is girls who aren’t punctual.