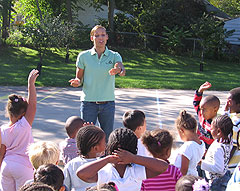 Olympic hurdler Lolo Jones, who grew up in Des Moines, made her first public appearances in Iowa Wednesday since her agonizing exit from the summer games.

Jones paid a visit to a Des Moines inner-city shelter for women and children. She posed for pictures, handed out plastic gold medals to the kids and even participated in a sack race…which she won.

“Yeah, ya know, I finally pulled off a victory, so I’m excited about that,” Jones joked after crossing the finish line. “Can I please have my medal?” In Beijing this summer, Jones had a commanding lead in the finals of the 100-meter hurdles, before she clipped one of the last hurdles and stumbled to a 7th place finish.

It was a painful moment, but Jones says it’s made her a stronger person. The mistake likely cost Jones from landing millions of dollars worth of endorsements. “(Winning the Olympics) would have been life-changing for me, but instead of life-changing in bank deposits, it’s life-changing in character lessons. I’ll take that,” Jones said. The 26-year-old Jones is planning another Olympic run in 2012. 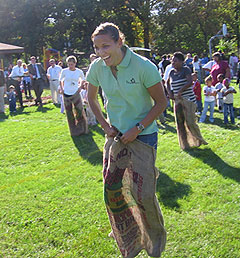 “Hurdlers normally peak between the ages of 28 to 33. I’ll turn 30 that summer, so I’ll be in my prime,” Jones said. A public ceremony to honor Jones is scheduled for Friday from 5 to 7 p.m. at the Jordan Creek Town Center in West Des Moines.