You are here: Home / Business / Ralph Nader campaigns in Iowa 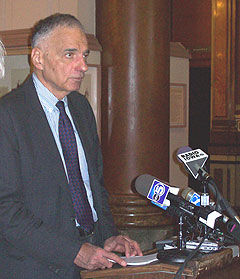 Independent presidential candidate Ralph Nader says congress and the president "could have made the crooks pay" for the Wall Street bailout.

Nader held a news conference at the statehouse over the noon-hour today. "Even in Wall Street I’ve been informed that they think it’s the wrong kind of bailout," Nader said, "that they’re bailing out the worst of the swindlers and speculators, instead of having a steel fence to protect the prudent savers and investors from the fallout of the Wall Street crooks and swindlers."

Nader argues "millions of innocent taxpayers" shouldn’t be footing the bill. "The worst aspect of this is that the congress could have made the speculators pay for it," Nader said. "All that was required is a one-tenth-of-one-percent tax on the $500 trillion of derivative transactions that will be traded this year which would produced $500 billion. They could have said to the traders on Wall Street — the crooks and the swindlers, ‘You want to be bailed out?…You’ll pay for your own bailout.’"

In addition, Nader said congress missed an opportunity to "re-regulate" the financial services sector of the economy. "Criminal prosecution of these corporate executives is in order and disgorgement of their ill-gotten gains is very necessary," Nader said. "There’s a gross sense of fairness that’s been violated and the American people are pretty outraged about it."

Nader’s stop in Iowa is part of his intended tour of all 50 states before the November election. During his statehouse stop, Nader made a point of calling for an end to ethanol subsidies.

"I’m not the type of a candidate who comes to Iowa and panders on the corn ethanol issue," Nader said. "…Urban and suburban consumer believe that the corn ethanol acreage is causing food prices to go up, bread prices — for example and other prices from edible crops whose acreage is shrinking due to the expansion of corn production."

Click on the audio link below to listen to all of what Nader had to say.