You are here: Home / Agriculture / Greenwald pleased by Latham attack 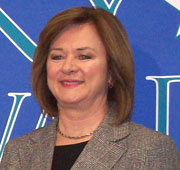 "I think the biggest hope we have is knowing that he’s actually on the attack," Greenwald says. "I’m mean he’s a 14-year congressman. You don’t see the other congressional members attacking their opponents, so I think this is a nice turn of events."

Latham’s campaign issued a news release Monday, saying "Becky’s Bailout" for "reckless and greedy Wall Street CEOs sinks the American people deeper in debt." Greenwald has said she would have voted for the bailout if she were in Congress.

"This was Iowa’s chance for a rescue plan and all of our congressional members except for Steve King and Tom Latham voted for that, including Senator Grassley," Greenwald says. "You know, this is an opportunity for us to react and help install confidence in Iowans and in Americans and help put a floor under the financial crisis that we’re facing and this is actually a crisis that through his repeated deregulation votes has caused this crisis to begin with."

First Lady Mari Culver says she senses movement in the Latham/Greenwald race. "I think Tom Latham can feel it, too, because yesterday he went on the attack against Becky Greenwald," Culver says. "In a written press release, he started attacking his challenger…We’ve all been around Iowa politics long enough to know that when you start attacking your challenger, that means your internal polls are telling you something."

Culver campaigned with Greenwald this morning and spoke at a news conference in Greenwald’s campaign headquarters. "Congressman Latham is a little nervous, a little anxious and that would account for why he is now attacking Becky Greenwald," Culver said.

The Greenwald campaign is pressing Latham to appear in a televised debate before Election Day. "There are serious issues that face the fourth district and it’s time for Tom Latham to come out from behind attacks of the radio microphone and press releases and discuss the issues on live television with the voters," Greenwald said, reading from a prepared statement.

Latham campaign manager Matt Hinch issued a written statement early Tuesday afternoon. "We appreciate the chance for Iowans to hear the stark differences between Becky Greenwald and Tom Latham through two debates held last week that can still be accessed online on the websites of radio stations WHO and KGLO," Hinch said.  "…It certainly will not require yet another forum for Iowans to learn about Becky Greenwald’s risky Wall Street bailout scheme.:

You may listen to Greenwald’s news conference by clicking on the audio link below.