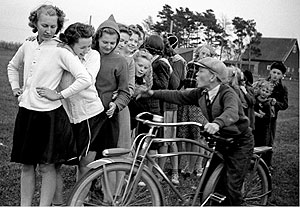 The tiny, northeast Iowa town of Ridgeway is gaining some national attention, thanks to a collection of photos snapped more than 60 years ago.

The pictures were taken by Everett Kuntz, a farm boy in the area that locals referred to as "Scoop" because he always had a camera around his neck.

Just before his death in 2003, Kuntz remembered the photos were in a box in his basement and his son David vowed to put them together in a book. The slim publication is titled "Sunday Afternoon on the Porch: Reflections of a Small Town in Iowa, 1939-1942" (University of Iowa Press). Author Jim Heynen wrote the text that accompanies the mix of posed and unposed photos.

"You really get a kind of panoramic collection of images of an era," Heynen told Radio Iowa. "Put together, you feel as if…he’s taken you into a world that we thought we had lost and collectively, I just thought it was beautiful." The photos include shots of a man getting a shave at the barbershop, the girls’ basketball and snowdrifts piling up around a windmill.

The cover of the book shows several people, kids and adults, gathered on a front porch. Heynen says the men in the cover photo appear to be mimicking poses of movies stars of the time. "That one foot up on a step, so that you have this right angled knee, leaning on it…which was such a classic pose of people of my father’s age. I think it was an imitation of what they were seeing Fred Astaire and other movie stars do," Heynen said. 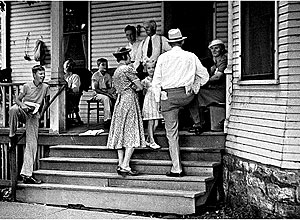 The book, released in June, is slowly gaining attention and increased sales. Last week, the photos and story of Everett Kuntz received extensive coverage in the New York Times. Heynen says the images are not unique to Iowa.

"If it had been small town Nevada or small town Georgia, it may have been the same thing," Heynen said of the photo collection. "There seem to be archetypal images of small town life of a different era that seem to resonate with many eyes." Everett Kuntz served in World War II and graduated from the University of Iowa. He and his wife Helen, who died this year, had three children – David and daughters Nancy and Carol.