You are here: Home / Human Interest / Expansion of Goldstar Military Museum is underway 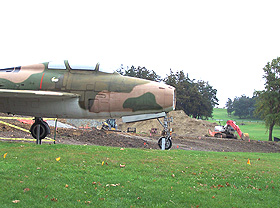 Rain didn’t stop a ceremonial groundbreaking for the expanison of the Iowa Goldstar Military Museum at Camp Dodge in Johnston this morning.

The ceremony was moved indoors where collapsible military shovels were used in a ceremonial  groundbreaking.

Museum president Bob Holliday spoke. "We have lived in the freest country in the history of mankind, and that has been possible, mainly due to the fact that many of our fellow citizens and a lot of Iowans, answered that call when it presented itself," Holliday says. Holliday says the museum serves as a constant reminder the people behind the freedom.

Vietnam veteran and former prisoner of war, Larry Spencer, is a volunteer at the museum. Spencer says we see buildings every day related to the military, but he says it’s the people in the buildings that are important. Spencer says people are what make an organization work.

"It’s the people with whom you live sleep, work cry, cuss and fight, sometimes among yourselves, and sometimes against the other guys," He explained. Spencer says whether you are on an aircraft carrier like he was, or in a tank company, you depend on everyone to be successful.

He says it takes everybody working together to make the organization work and he says there’s probably no other organizations that are that closely tied together. "And the bond that exists between people that have served is immensely strong." Spencer says the bond lasts a lifetime and often is unspoken, but is always there among veterans.

"The shared experiences that veterans have is universal, it doesn’t make a difference whether you are in the Army, the Air Force, or the Navy, Marines or Coast Guard,"Spencer says, "that bond is palpable, you can feel it. We see it at the museum when somebody drops by on and afternoon and says ‘I didn’t know this place was here, but my grandfather served, you know, he had a hat just like that’." 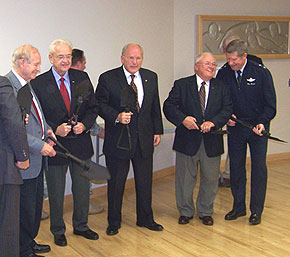 The expansion plans call for adding 18,000 square feet to the museum, along with state- of-the-art displays. Spencer says it’s a fitting way to honor veterans.

Spencer says, "As a veteran I am very proud to be a part of this fine organization. Iowa has a heritage of military service against which we can put up against any state. We should be proud of today, and every day. We’re Iowans."

The addition to the museum is underway to the south of the current building. The Iowa Legislature appropriated four-million dollars for the expansion. A fund raising effort will soon get underway for phase two of the project to fund the new displays. The project is expected to be completed sometime next year.