You are here: Home / News / Gypsy moth showing up in larger numbers in Iowa 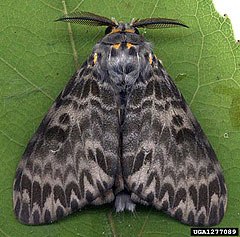 A pest that’s been damaging trees in the eastern U.S. is now showing up in record numbers Iowa.

The gypsy moth was brought to America from Europe 100 years ago to provide silk for the textile industry. The insect escaped and has slowly crept westward from New England.

Tivon Feeley, with the Iowa DNR Forest Health Program, says the larvae of the insect feeds on the leaves of more than 300 tree species.

"I guess they’re most noticeable because they defoliate, so when you drive through states like Pennsylvania, you notice all of these defoliated trees and that’s why they’re so notorious," Feeley said. "After repeated defoliation, they can actually cause the tree to die out."

The DNR is trapping male gypsy moths in eastern Iowa and this year’s numbers have surpassed the previous record of 371 moths that were captured in 1998. "This year, we’ve got 624 male moths in our traps," Feeley said. "We’re still counting, so the numbers may go up slightly. Most of the gypsy moths are in Allamakee, Clayton, Dubuque, Jackson and Clinton County."

An organization called the Gypsy Moth Slow the Spread Foundation is working in other states to control the pest with various treatments and chemicals. Feeley says the gypsy moth is still not considered to be "established" in Iowa, so for now, the DNR is just monitoring the situation to determine future management options.

Experts did not expect the gypsy moth to present a substantial problem in Iowa for another 15 to 20 years. "So, this is kind of a surprise to everybody," Feeley said. "Bordering states are also seeing increased numbers – Illinois, Wisconsin and Minnesota. Right now, we’re going to sit down, look at where all the catches are and determine our next plan of action."