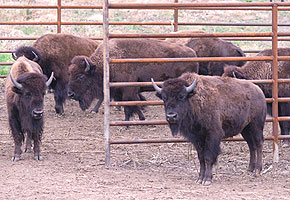 The Nature Conservancy in Iowa brought in the buffalo from the Wind Cave National Park in South Dakota.

Scott Moats is the manager of the grasslands preserve and says the buffalo are going to be roaming renovators. He says the buffalo will enhance the restoration areas of the largest native prairie area in the state, as they are a native grazer that’ll provide some "disturbance" that will benefit the native plant and animal community. Moats says they expect the herd to eventually grow to 250.

Moats says he isn’t sure how long it will take for the buffalo to make an impact on the landscape, but says they’ll likely make some small scale immediate impact. He says as the heard grows to 250, the restoration of the 25-hundred acres will really show. "I think the changes that you see are going to be very discernable and you’ll start getting a mosaic of habitats out there and a mosaic of plant composition and structure," Moats says. Moats says the animals should be self sufficient.

Moats says they believe they have the correct number of bison so they will have adequate forage to graze on and they don’t plan to do any supplemental feeding. Moats says locals and visitors will eventually see the buffalo moving in the area in their everyday mode. 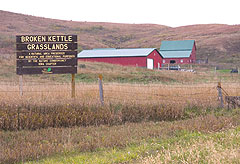 Moats says there are a couple of roads that are near the preserve where people will be able to see the buffalo, but it won’t be like a national wildlife refuge or park with a bison display.

The buffalo are in holding pens now as they get used to their new surroundings before being turned out into their new home.

(Photos courtesy of Chris Helzer of the Nature Conservancy.)