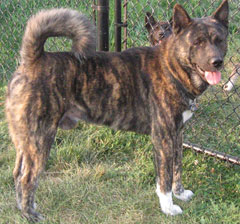 The last of the three dogs an eastern Iowa family lost in the Des Moines area after a wreck on Interstate-80 has been found. Jillian Coglan of Oxford says her family was reunited with the last dog early this morning.

"I got my baby back and she seems to be OK," Coglan says. A teacher at a suburban Des Moines school saw the missing dog in a field near the school last night at dusk. She quickly went on-line to check a story about the missing pet and called the dog’s owner.

The family and a policeman from a Des Moines suburb searched in the dark for four hours last night, but the dog wouldn’t come to his owners.

"We left out a blanket and food and water and she came up to that before we left and got some food and laid down on it, but still wouldn’t let us get close to her," Coglan says, "so we went home and we came back first thing this morning here at dawn and she was laying on the blanket but she bolted over the hill when she saw people and we took Kuma up there and once she saw him, she came running to us."

Kuma is one of the family’s four Akita dogs — the one dog who was not tossed out of his kennel when the family’s vehicle hit a deer early Monday morning along Interstate 80. The dog retrieved this morning seems fine, but they’re taking him to a vet for a check up.

"Our other one, Kioshi — the male that we caught (Wednesday) morning, we actually caught him because he got hit by a car on Merle Hay (a major, four-lane street on the north side of Des Moines)," Coglin says. "He’s got a fractured jaw and he’s having seizures from brain swelling. He’s up at Iowa State. They’re going to take him in for surgery as soon as they can get him stable, but at least we know where they all are."

The dogs are trained to respond to commands in Japanese and the dogs are on stage during the family’s Samurai sword show. That’s why they were all on the road in the wee hours of Monday morning, making their way back from Wichita where they’d done a weekend show.

"I just want to thank everybody that’s been wonderful for helping us search and for calling in when they’ve seen them instead of ignoring it as a loose dog," Coglin says. "The community here has been absolutely wonderful and supportive and I just want to thank everybody." Coglin made her comments during a telephone interview with Radio Iowa and you could hear the two reunited dogs barking in the background during the conversation.