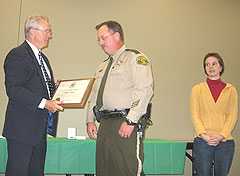 A sheriff’s deputy and a Runnells man were presented with awards Thursday for their actions at the scene of a fiery traffic accident this summer.

The truck driver wasn’t hurt, but Elrod was unconscious and trapped in her car. Toby Ames of Runnells witnessed the accident. "As soon as the two (vehicles) contacted each other, they burst into flames," Ames said. "I had enough time to grab ahold of (Sarah) and pull her out of the car."

Polk County Sheriff’s Deputy Perry Ghee arrived on the scene a short time later and administered C-P-R. "It’s amazing, I mean I just can’t believe what they did. Without them, I probably wouldn’t be here," Elrod said Thursday at a ceremony where Ames and Ghee were presented with Life-Saving Awards by the Polk County Sheriff’s office.

Deputy Ghee claims he was just doing his job and the person who really deserves praise is Toby Ames. "In this business, we have to guard against becoming a little jaded when we see the things that human beings do to other human beings," Ghee said. "When someone comes along like Toby Ames…it reminds us that he is the rule and not the exception."

Elrod spent a month in a brain injury recovery center. She has no memory of the accident or anything that happened for several weeks before the crash. Sarah’s mother, Mary Elrod, says the ordeal has definitely changed their lives.

"Well, I think it’s renewed our faith in lots of ways," Mary Elrod said. "We’re not only thankful to the people that were there for Sarah that day, but we feel like there was divine intervention as well." Sarah is hoping to someday return to school, to study chemistry, at the University of Iowa.