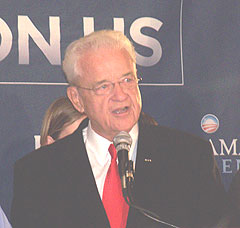 Boswell says there’s a long list of things to get done in the next term, including energy independence, stopping global warming, stopping jobs from going overseas, shoring up Medicare and Social Security.

He says the U.S. must also end the war in Iraq.

Boswell, was already looking ahead to his next term. Boswell says he is asked about running again and says it will take a lot of time to get the things done he wants and says "Yes, I will run again."