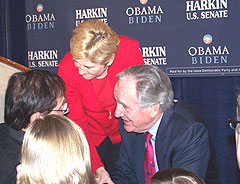 Harkin spoke to supporters who held up blue signs with his name and chanted "six more years." "And from the bottom of my heart, I want to thank you the people of Iowa for putting your confidence in me once again. It’s been the greatest honor and privilege of my life to represent you in the United States Senate. It’s truly humbling to be elected for a fifth term, thank you Iowa," Harkin said.

Harkin says he’s anxious to get to work with the new president. "Boy do we have a lot of work to do," Harkin says. He says they have to bring the country together and get it moving again.

Harkin’s Republican opponent, Christopher Reed of Marion, is not conceding until "100 percent" of the votes are counted. "The voting’s over but it’s not done yet," Reed says. Reed spoke with Radio Iowa by phone about an hour and a half after the major networks had called the race for Harkin.

"When all the votes are counted, then we’ll see where we stand then we’ll let people know how we feel then," Reed said. Reed, a first-time candidate, enjoyed the experience of running for office. "I’ve had a good time meeting all the Iowans and, you know, I think it’s great the people who came out to support me today," Reed said. "We’ll know more when these votes are counted."