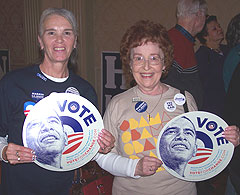 More Iowans voted in this year’s election, but the total is not as big as initially calculated. Just after 1 a.m., results from the Secretary of State’s website showed over 1.7-million Iowans participated.

That means 72% of Iowa’s registered voters cast a ballot this year. That compares to 75% four years ago, but the total number of Iowa voters this year increased slightly from 2004. Early indications show the national figures for voter turnout near 64%. Mauro says all of the numbers are unofficial.

"There’s still going to be absentee ballots added to this total because everything that was postmarked the day before (election day) has to be added to the total," Mauro said. "And there’s still provisional ballots…special precinct committees will meet and make determinations what provisional ballots will be allowed into races. So, any number…is a preliminary unofficial number and it should get higher from here on out."

Across the country, there were polling sites Tuesday where voters waited in lines for several hours to cast their ballot. It doesn’t sound like there were any lines quite like that here in Iowa. Mauro says, from what he’s heard, the longest voters had to wait in line in Iowa was about 45 minutes.

That was reported on the campus of Iowa State University in Ames. Mauro says he has not heard about any major problems at Iowa’s polling sites, though he is checking out concerns with absentee ballots in Woodbury and Poweshiek Counties.