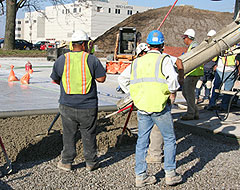 The state of Iowa is testing a relatively new type of concrete with the construction of a parking lot in Des Moines.

A small, 16-foot section of the new lot on the Capitol Complex will be made with pervious concrete. The honeycombed type of concrete still produces a hard surface, but absorbs rain water.

Robert Bailey, with the Department of Administrative Services, says the idea is to mitigate water runoff. "That gets to be a really big problem," Bailey said. "The runoff from parking lots or concrete spaces can overflow a city’s storm sewer system, especially an older system such as Des Moines’. This is designed to allow water to trickle down through the earth more naturally."

The pervious concrete being poured near the corner of East 14th and Grand in Des Moines is also special in its formulation.  The concrete has been in use for quite a while in states with warmer climates. "They’ve been testing at Iowa State University to come up with a (form) of this technology that will work in the upper Midwest," Bailey said. "Because we have such severe swings in temperature, we don’t have quite the stability in the ground as they do in southern states." Unlike traditional concrete, pervious concrete is not made with sand. Bailey says the State of Iowa parking lot also utilizes a lot of rock.

The pervious concrete is poured over a bed of rock that’s four feet thick. "That also facilitates the sort of trickle down action of the water," Bailey said. The pervious materials are more expensive than traditional concrete, costing up to 30% more, but Bailey says savings are realized in improved water quality and fewer storm sewer repairs.

The Des Moines parking lot will also feature bio-cells, where some of the rain water will be directed. The cells will consist of natural grasses to further mitigate runoff. The parking lot, which has a price tag of 963-thousand dollars, could be ready for state employees to use sometime this winter.