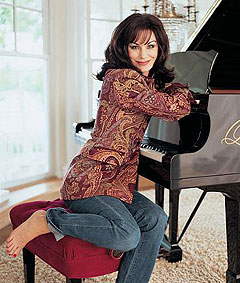 “Christmas Around The World” is the name of Line’s tour and her latest CD — her 30th CD in the past 19 years. Line says this year’s international theme presented a challenge.

“I surrounded myself with world musicians, so people who played different instruments that would give the piano and the songs a world flair,” Line says.

“For Africa, that’s all about percussion. For Latin America, it’s flamenco or nylon-string guitar. For Asia, its the pentatonic scale,” Line says. “I did a lot of research this year and I had a wonderful year educating myself as to how to create world music and world sounds.” The stage show is designed to dazzle not only the ears, but the eyes, Line says, with a host of costumes, dances and other elements.

“Because we’re doing Asia, we have a martial arts scene where all of the men had to learn martial arts,” she says, while the women, herself included, learned choreography with fans and flags. The tour schedule is grueling, taking Line and her troupe to 28 cities in nine states, playing 42 shows between now and Christmas. Line says she stays energized on the road by maintaining a relatively strict routine — including watching everything she eats.

“I need lots of protein. I don’t eat any junk. Just a little bit of carbs. I’m very focused on my diet,” she says. “I also, every day, work out and then I listen to really beautiful calming music and I do a yoga session every day by myself so I’m in top mental shape and I’m in top physical shape, the best in my life, just because I’m very focused on that kind of energy and putting it out there.”

Line was “discovered” playing the piano in a Minneapolis-area department store and has since sold more than five-million albums and has 22 music books in print for piano players. The tour runs through December 23rd. In addition to the opener in Mason City, other Iowa cities on the list include: Iowa City, Ames, Des Moines and Spirit Lake.