You are here: Home / Military / New cemetery the focus for some on this Veterans Day 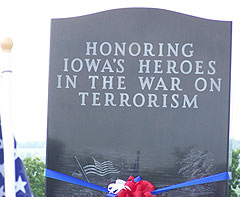 The focus of some Iowans this Veteran’s Day will be on the new Iowa Veterans Cemetery near Winterset.

Ground was broken for the cemetery on Veteran’s Day in 2006 and the site was dedicated on July third of this year. Cemetery director Steve Young says 145 veterans and their spouses have been buried there since the dedication.

Young says number of daily visitors has continued to be steady, and the common thing they hear is that it’s not a down thing to go to the cemetery, but it is a place of comfort comparable to Arlington and other national cemeteries.

Young says over 1,800 people have applied to be buried at the cemetery — which includes people from three-quarters of Iowa’s counties and 11 states. Young says several families have disinterred loved ones from other cemeteries to move them to the Iowa Veterans Cemetery.

You can call for more information at: 515-996-9048 or go on-line to the Iowa Veterans Cemetery  website. Young says they will fly 21 burial flags that draped the caskets of veterans and were donated along their avenue of flags this Veteran’s Day. Each gravesite will also be decorated with American flags.