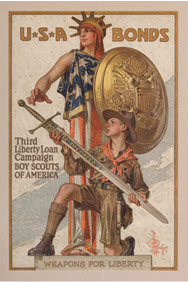 As we honor those today who’ve worn our country’s uniform, the State Historical Museum is recognizing a specific group of Iowans who served in a particular war. Jeff Morgan is spokesman for the downtown Des Moines facility.

Morgan says: "We’re celebrating Veterans Day today and honoring the service and sacrifice of Americans servicemen and women, and Iowans in particular. We just felt this was a good opportunity to explore the history of the First World War and the role Iowans had at home and abroad. The exhibit contains artifacts from our permanent collection and it showcases the stories of several Iowans who were involved in that war."

Morgan says the exhibit is called "Over Here, Over There: Iowa and the First World War." The artifacts include a blood-stained jacket that was worn by Colfax native and writer James Norman Hall when his plane was shot down. Hall survived a German prison camp and went on to write several popular novels, including "Mutiny on the Bounty" in 1932.

Other items on display include a host of World War One weapons and more than 30 American, French, British and German propaganda posters. Morgan says there’s also a lot of information about West Branch native Herbert Hoover, the only U.S. president from Iowa, who was prominent in food relief efforts during the war. The exhibit also features a profile of Marion Crandell of Cedar Rapids, a nurse and the first American woman killed in the war.

The opening of the exhibit comes 91 years after the first Iowan, and perhaps the first American serviceman, Merle Hay, died in World War One. The display includes "Tradition and Valor," a film about James Morris, who came to Fort Des Moines, where the U.S. Army trained black officers for the first time in its history. For more information about the museum or the exhibit, visit the  State Historical Museum website   or call (515) 281-5111. Admission is free.