You are here: Home / Human Interest / Book about rescued Spencer kitty is a top seller 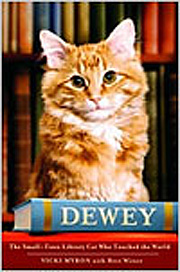 A book written by a former Spencer librarian about a stray cat is at the top of the New York Ti mes bestsellers list for hardcover nonfiction. Vicki Myron rescued the half-frozen kitty from the book drop at the Spencer Public Library in 1988 and named it "Dewey Readmore Books."

The cat quickly became famous and led Myron to pen the book: "Dewey: The Small Town Library Cat Who Touched the World." Sales have gone beyond what she expected. "I knew the book would do well, but I was very surprised to hear we were going to number one," Myron says. She says sales have continued to go up.

Dewey had to be put to sleep in November of 2006. The cat’s story continues to touch people around the country from the young to the old. Myron says it’s selling everywhere and is also number one on the independent sellers association. She says the only place where the book isn’t number one is northern California — but it is number four in sales there.

A series of children’s books is the next project for Myron. She says the books will be some of Dewey’s adventures in a picture book for little kids, and then a book geared more for young adults. Myron will also be putting on lots of miles in the next few weeks as she promotes the book. The book deal was reportedly worth one million dollars.

Myron says she’s close to signing a movie deal — and apparently a star is interested in playing Myron in the picture. Details on that can’t be released yet.