You are here: Home / Agriculture / Ethanol companies fight back against accusations 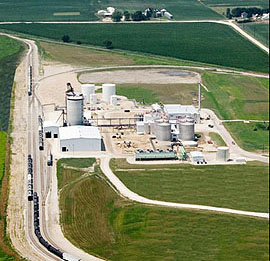 Several ethanol companies are joining forces to counter accusations that biofuels production is driving up food prices. Hawkeye Energy of Ames and Amaizing Energy of Denison are the only Iowa based companies that are part of the new organization called Growth Energy.

The coalition is responding to a public relations campaign launched earlier this year by the Grocery Manufacturers Association. Bruce Rastetter is CEO of Hawkeye Energy.

"Today, corn is 50-percent of the price it was last spring, but food prices haven’t fallen," Rastetter said. "So, I think the simple message to the GMA is ‘did you intentionally mislead the public or were you just plain wrong?’" The GMA has asked lawmakers to roll back incentives for ethanol. Growth Energy has countered ads in the New York Times and Washington Times.

Rastetter says he questions why food companies are reporting record profits when gas and oil prices, along with corn prices, have dropped. Growth Energy’s backers include Green Plains Renewable Energy of Omaha, which has plants in Superior and Shenandoah, and POET, which is based in Sioux Falls and owns a plant in Emmetsburg. Rastetter expects more ethanol companies will join the Growth Energy campaign soon.

He says, currently, about 30 to 35 percent of the U.S. ethanol industry is involved with Growth Energy . "I would expect, within a month, about half of U.S. industry will be supporting this ad campaign," Rastetter told Radio Iowa. The organization is also campaigning to expand the use of ethanol in gasoline by asking federal regulators to allow for an E-15 blend at gas stations.