You are here: Home / Fires/Accidents/Disasters / Floodwall for Oakville halted due to "artifacts" discovery 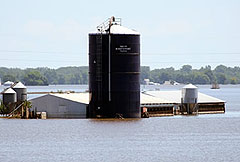 Plans for a new levee to protect the small eastern Iowa town of Oakville could be delayed because of artifacts discovered in the project’s path along the Iowa River.

The artifacts are believed to be more than one-thousand years old. Fournier says he can’t disclose exactly what was found or where workers made the discovery. Federal officials and the Iowa State Historical Preservation Office will examine the findings and determine if the area deserves a spot on the National Register of Historic Places.

Fournier says it’s not uncommon for workers to find historic artifacts while working on levees. “Especially when you’re talking about areas along the rivers in the Midwest,” Fournier said. “They do date back quite a bit to the settlement days, so we do uncover stuff. It’s not on a regular basis…from what I’m aware of, we haven’t found anything significant in the past couple years.”

The discovery could delay construction on the final levee until after next year’s flood season. If that happens, federal officials say they will raise the temporary levee – which was constructed in July – by five feet. “Even though we found the artifacts, we are not going to let flood protection take a backseat,” Fournier said. “We certainly are going to work as fast as we can to complete the archeological surveys and whatever work might need to be done.

But, we are certainly going to work to ensure the citizens of Oakville have flood protection in the spring, whether it’s actually completing the final levee or building up that temporary levee system.” The flooding that hit Iowa in June buried Oakville and more than 22-thousand acres of area farmland under water. All of the Louisa Couty’s town’s 400-plus residents were forced to evacuate following a levee breach.