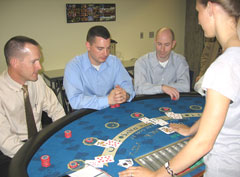 The state Racing and Gaming Commission voted to double down today  and decided to conduct two studies on the potential for new casinos in the state. Commission chair Greg Seyfer of Cedar Rapids says they felt they could afford both studies.

Seyfer says the two proposals were the lowest of the four cost-wise and they felt two studies would give them that much more information to make the decision. One study by the Innovation Group of Littleton, Colorado will cost $106,500, and the other from the G-V-A  Marquette Advisors of Minneapolis will cost $75,000.

Seyfer says both companies will study the same thing. “The key is, do we have any underserved markets? Then do we have any markets that are already served, but are underutilized…are we missing any spots where it might make sense to have another casino?,” Seyfer says.

The commission has asked the companies to include a specific focus on Webster, Wappello, Franklin and Lyon counties. He says those are the counties the commission knows have shown an interest in new casinos and the commission feels they owe it to those counties to know they are a part of this study. Seyfer says the studies will take about six months to be completed.

Seyfer says they are looking to get the studies back by May 15th or earlier, and he is not sure if that would give the commission enough time to review the studies and make a decision on new licenses at their June meeting. The commission granted four new gambling licenses in May of 2004. They later decided to wait to award any new licenses until getting another study of the gambling market in the state.