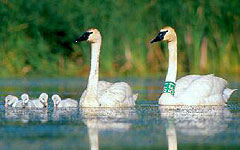 Separate hunting accidents in Iowa over the weekend left two rare trumpeter swans dead and one hunter hurt. Alan Foster, spokesman for the Iowa Department of Natural Resources, says the protected swans were gunned down by two different groups of hunters in Muscatine County on Saturday.

Foster says: “The younger kids took a shot, both of them did. One missed, one connected and killed the one bird. The surviving mate circled the area a couple of times and passed over a second set of hunters. Both of those guys opened up on it and unfortunately, the second one died as well.”

There are duck and goose seasons open in Iowa at the moment. Foster says both sets of hunters claimed they mistook the trumpeter swans for other legal species — even though he says the trumpeter is about four times bigger than a snow goose and certainly looks nothing like a duck.

“Not at all,” Foster says. “A trumpeter swan has a seven- to eight-foot wingspan, pure white, black bill, unmistakable call. In fact, the second bird that was killed was part of a collared tracking project and had a sizable red neck band around it when it was shot.”

In a separate incident, Foster says 16-year-old Mathew Allen of Dumont shot himself in the leg when he fell as he tried to cross a fence near Waverly late Saturday while raccoon hunting. Allen’s injuries are not life-threatening. Foster says it’s the fourth incident in Iowa this year that involved a hunter being shot and injured, though he adds, no hunters have been shot and killed in the state during as yet.

“We’ve actually had a really good year so far, given we’re knee-deep into the hunting season already,” he says. “We’re in November and will hunt through the bulk of January. We’ve gone a long way without anything serious and, knock on wood, hopefully we’ll keep that up.”