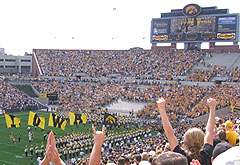 The big banner which someone apparently stole from the University of Iowa’s Kinnick Stadium after Saturday’s Hawkeye football game against Purdue has been returned.

Five huge flags used on-field by the cheer squad spell out "Iowa" and carry the Tigerhawk. The flag that flew away bore the giant "O".

Greg Niemiec, the U-of-I’s spirit coordinator, says University Public Safety found the filched flag. "They called me last night around eight and said they’d recovered the flag," Niemiec says. "They didn’t say where it had come from or how they’d gotten it. They just said that they had it."

He says it’s a large enough item that you’d think someone would have noticed it being smuggled out of the stadium. Niemiec says the 12-by-15 foot black-and-gold banner wasn’t damaged. "No, it’s actually in fine condition — kinda’ rolled up in a ball. We normally fold them up a little nicer but no, it doesn’t look like anybody was out there using it for a blanket or using it for a tent or anything."

The flag is missing its wooden pole, but Niemiec says they have a spare one of those. There are no spare flags though as they cost $580 each. Niemiec wouldn’t speculate on who may’ve made off with the flag — a disgruntled Purdue fan? Someone from Ohio or Oklahoma? An Obama supporter?

He laughs and says, "Maybe. If it was a souvenir, you’d think they’d go for the "I" or the Tigerhawk, but, the "O"? Maybe they realized it doesn’t do too much by itself." Niemiec says the cheer team is excited to have its full slate of flags back for this weekend’s final season game at Minnesota — and, of course, for the bowl game at year’s end.