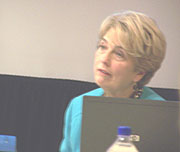 Department of Education director Judy Jeffrey’s annual report on the condition of education predicts Iowa’s 10-year decline in student enrollment will turn around.

The report predicts a 7.7% increase over the next five years. Jeffrey says an influx of minorities into the state is one of the reasons for the turnaround.

She says Iowa may do even better in the coming years as other states lose jobs and it appears Iowa may have jobs to offer if those people can be recruited to the state. Jeffrey says Iowa’s birthrate “is not as disastrous as it is in some of the other Midwestern states.”

Jeffrey says the graying of Iowa could be slowing and leading to more kids. Jeffrey says we may have reached our peak as one of the oldest states in the nation, and may be on the way to getting younger people into the state who’re having children.

Testing shows that 11th graders did not improve their math and reading skills as much as fourth and eighth graders, and minorities in those groups also did not make big strides. Jeffrey says that’s her biggest concern. She says the achievement gaps (between minorities and whites) and the lack of growth in our high schools are things that pose a challenge.

“We’re really focusing a lot on how we can change our high schools, but we know that we need more rigorous and relevant learning opportunities for out students, that they are still not as engaged as they need to be in high school curriculum, and we’ve really got to push that agenda pretty hard,” Jeffrey says. Jeffrey says the gains in 4th grade come after federal dollars were targeted at them, and doing something similar is needed for high school.

Jeffrey says they were able to take the resources and focus on professional development for primary teachers and the effects are showing as the 4th graders are doing well and the 8th graders are doing better, but there’s not a lot of growth in the high schools.

While the influx of immigrants has brought new students into the system, those students provide the challenge of teaching more students who don’t know English. Jeffrey says school districts are doing what they can to meet the need, but says they need more foreign language and more bilingual teachers.

Jeffrey says bilingual teachers are one of the best ways to educate students as they can talk and to them and teach them. Jeffrey also pointed out to the Board of Education that Iowa spends just over eight-thousand dollars per pupil to educate students, while the national average is over $9,500, and neighboring states like Minnesota and Wisconsin spend over $10,000 per pupil.

Jeffrey says Iowans already get a great bargain for what they spend on education — but could get even more benefit with more education dollars. Jeffrey says many of the districts facing achievement gaps say they are working as hard as they can, but with more resources and professional development would accelerate that work.

You can see the entire report here: “ 2008 Condition of Education “.