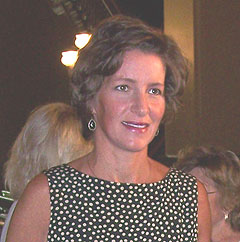 Iowa’s first lady has issued a statement of apology after being seen smoking in a vehicle that’s leased by the state.

First Lady Mari Culver was spotted at a stoplight earlier this week in Des Moines, sitting in an S.U.V. reserved for the Culvers and smoking.

Mrs. Culver said in a statement released Thursday that "like many Iowans" she has "struggled" to quit smoking. She went on to say she "successfully" quit last year, but "unfortunately" took up the habit again "a few months ago."

Culver, who is an attorney, admits in the brief written statement that she did smoke in a state vehicle, saying it’s an action she regrets. She promised that it wouldn’t happen again.

The new state law which took effect on July 1st bars smoking in most public places, including vehicles that are used by more than one person for work purposes. Her husband, the governor, signed that bill into law on April 15th. "All Iowans will benefit from cleaner air," Culver said during the bill-signing ceremony. "…I understand there are compelling arguments against this bill, but the bottom line is this bill will save lives, plain and simple, and I am happy to sign it today."

The governor has not issued a statement regarding his wife’s smoking in a state-owned vehicle. In February of 2007, Governor Culver "outed" his wife, revealing during a speech at a hospital that she’s a smoker who’s struggled to quit. On February 19, 2007, a statehouse reporter asked Culver whether he thought his wife would be able to kick the habit.  "We’ll see," was all Governor Culver said in reply.

Mrs. Culver’s smoking was a topic of discussion as lawmakers debated Iowa’s Smoke-Free Air Act this past spring. Representative Chuck Soderberg, a Republican from Le Mars, was among those who argued private residences like the governor’s mansion that are owned by the state should be smoke-free areas.

"The state really does need to lead by example. We have a lot of investment in historical buildings that I think we need to make sure that we protect and preserve also," Soderberg said during a committee meeting. "And I kind of go back…to the Condition of the State (message in which) our governor made the comment that if you’re going to talk the talk, you need to walk the walk."