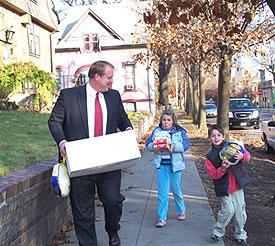 Iowa’s Governor delivered some early Thanksgiving cheer Wednesday. Governor Chet Culver and his daughter Claire and son John delivered the ingredients for the Thanksgiving meal to the Beacon of Life women’s shelter in Des Moines.

Culver says there are “literally tens of thousands of women and children” across the state that rely on the services like those provided at the shelter and people need to know they can use as much support as possible. The Beacon of Hope was one of five shelters to receive the food delivery from the governor in a holiday tradition he started last year.

Culver says it’s a nice way to “do something important” and provide some extra food, while highlighting the women and children that are at risk. The executive director of the shelter, Ruth Hardin, says they serve 24 women. She says the women come with “difficult backgrounds” and are expected to overcome those backgrounds through the program which is “highly structured and no nonsense.”

Hardin says the women can stay a maximum of four months. Hardin says any extras they can get are welcome — especially now with the poor economy and so many agencies vying for help. Culver says he will also press the legislature to provide more funding to shelters.