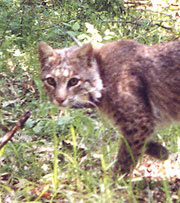 Iowa trappers and hunters took the state quota of 200 bobcats this year less than one month after the season opened. The bobcat season covered the southern two tiers of the state.

Woodbury County conservation officer Stacey Sisco says this was the first year her county was able to participate in the season. She says the animals are migrating to the Loess Hills area in greater numbers every year.

"Since 2000, every year we’ve had more and more bobcats turned in from trappers that are trying to harvest raccoons and coyotes and stuff," Sisco said. The Department of Natural Resources says the bobcats are coming to Iowa because of the state’s grassy pastures and abundant food, primarily small rodents.

The bobcat was labeled an endangered species in Iowa from 1977 to 2000, but now bobcat sightings are common. Sisco says the bobcat trapping season is held to keep the population in check and to decrease the risk of disease.

"With any species, if you let them get too populated, they’re going to get a disease," Sisco said. "With bobcats, a single bout of Feline Leukemia can wipe a bunch of them out." Bobcats are considered a fur-bearing animal and are sold for their skins. This year, nearly two dozen bobcats were tagged in Woodbury, Monona and Harrison counties in western Iowa.