You are here: Home / Politics / Govt / Today’s Presidential transition much different than past 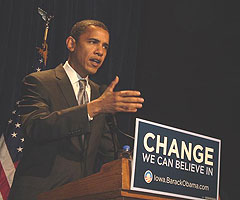 President-elect Barrack Obama has been in the spotlight the last few days as he announces transition plans.

University of Iowa political science professor, Cary Covington, says it’s important to have a smooth transition with the current economic situation Obama will face on taking office. He says Obama has taken a page out of Ronald Reagan’s playbook in trying to assure a smooth transition.

Covington says Obama has “parachute teams”, or groups of people who are going in an watching the people who are now running the government to see what they are doing. He says these won’t be the people who hold the jobs, but the people who teach the appointees how to do their jobs when they come in — something he says Reagan did very effectively.

The federal government now provides money for a transition office and staff for the incoming president. Covington made his comments today on the Iowa Public Radio program, “The Exchange.”