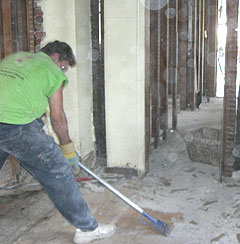 Hundreds of eastern Iowa homes that were damaged in this spring’s floods are still not ready for the approaching winter. Pastor Melissa Bracht-Wagner, of First United Methodist Church in Marion, says they’ve been hosting and coordinating volunteer workers from all over the country for months, but more helpers are urgently needed.

"We need teams to come to Cedar Rapids and to Palo and our neighboring communities who have skills, ones that can hang drywall," Pastor Bracht-Wagner says. "We need licensed electricians and plumbers and individuals who can mud and to paint just to get us to the next spot so that we can get one home done and another and another."

Until recently, she says some people have been living in tents or sleeping in their vehicles because their homes still aren’t ready. The latest blast of wintery weather, including snow over the weekend, has been a big wake-up call in Cedar Rapids.

"Early in November, we had some really nice weather and then it turned cold like three days later into winter coats," Bracht-Wagner says. "I think the reality of ‘This is Iowa — it’s going to get cold’ finally hit individuals and they really weren’t prepared for what to do next."

She says the church’s flood recovery office has been inundated with pleas for help from residents who’ve been plugging along, doing the jobs themselves at night while going to work during the day, and who now find themselves facing the foul winter weather. Bracht-Wagner says the recovery process is really taking a toll.

"As the weather has turned cold, our community has gotten a little more depressed and recognized the need that either they’re going to rebuild this winter, or they’re not, they just can’t get the things that they need done," she says. "In those cases, we’ve been boarding up the homes and trying to do our best to keep the water lines from breaking." Volunteers from across Iowa and the U.S. are encouraged to visit the church’s website and click on "Flood" or call (319) 377-5344.