You are here: Home / Agriculture / Turkey industry had little to gobble about this year 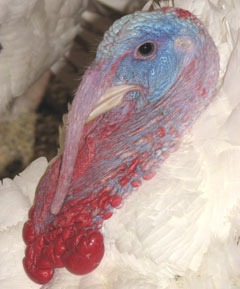 Supplying the national turkey that was pardoned by President Bush is one of the few highlights in a tough year for the Hamilton County farmer who is the chairman of the National Turkey Federation.

Paul Hill of Elsworth enjoyed the spotlight of supplying the national turkey to Washington, but says it has been a tough time for producers of the Thanksgiving bird.

Hill says, "The state of the industry this year is just about like the whole economy, it sucks." Hill says there was overproduction of turkeys for the first time in a number of years, and that coupled with high feed prices led to "dramatic losses" for the industry.

For Hill and other turkey growers, that means cutbacks in the year ahead as his organization is cutting back the number of turkeys it grows by 50% for seven months. Hill says they have to get the supply levels back to where they should be. His farm typically raises about 700,000 turkeys each year.

Hill says turkey growers have seen a change in the use of their birds. He says it used to be that 55 to 60% of the turkeys were sold between Thanksgiving and Christmas, but that has now dropped to 22 to 25% and moving down. Hill says many of the turkeys now go to sandwich meat. Hill says while turkey growers have had to endure tough times, the overproduction has kept turkey prices from rising as much as other food — which he says has been a good deal for consumers.