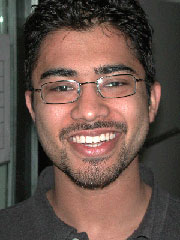 A University of Iowa graduate student who is from Mumbai says none of his family and friends were killed in last week’s terror attacks, but 27-year-old Alok Shah knows people who lost loved ones.

"I’m just constantly calling my parents and my family back in Mumbai….and in addition to that just following it on-line, looking at all of the news stories and different blogs," Shah says. "There are a lot of really good sources on-line that during the entire crisis gave us pretty much an hour-by-hour update on what was going on so often it seemed that I knew more about what was happening than people in Mumbai themselves."

Two of the bomb blasts occurred less than half a mile from his home in Mumbai. Shah is old enough to remember the 1992 attacks in Mumbai. "Those actually were really bad because it consumed a lot more of the city. It just hadn’t hit South Mumbai which is where the terrorists focused their attacks this time," Shah says. "South Mumbai is basically the Manhattan of India, so to speak and it’s where the upper class and the rich people live and I think in 1992, most of that had gone completely untouched, so in a way we were sheltered."

Last week’s terror attacks focused on tourist sites and Shah says November, December and January are prime times for tourist traffic in India. "The weather is fabulous at this time so, you know, if you want to escape the Iowa winter or the New York winter, India is a great place to go," Shah says, "except, of course, when terrorists strike."

Shah, who earned a degree from Grinnell College in 2004, is a med student at the University of Iowa. "You know, it’s really nice. I’ve been getting calls and emails from people at the University of Iowa right now as well as people I’ve gotten to know over the years of being in the U.S. Everyone was concerned about my family and me," Shah says. "It’s really touching. It’s nice to know you’re halfway across the world, you home and your family can be under threat and you can still have a great support system."

Shah’s family tells him Mumbai is "back on its feet."

"My dad was, you know, working again and my mom was out and about, but I think there are some areas that are still under curfew," Shah says. "People I know are visiting the sites of damage…There’s a lot of people just going there to see what was going on and if there is any way that they can help."

Shah says he feels safe in Iowa City and wishes residents in his home city could feel that way again. "You know, it’s a shame that in this day and age so many people have to still live with this kind of violence and have to be afraid of their lives while just doing daily things — walking around, getting on with their daily lives," Shah says. "That’s one thing we never quite worry about things blowing up or people indiscriminately shooting at us and it’s nice to be secure. It would be great if more people could feel secure like we do."

Shah plans to fly back to Mumbai in February. "That’s all I was thinking of during this entire crisis, that I really just want to go back home, give my parents a hug, make sure everyone’s fine, just be there with them in this entire, but the soonest I can go home is February," Shah says. "If there was any way I could move it up, I definitely would."

Shah hopes to finish med school at the University of Iowa in May.